Toxoplasmosis is a disease caused by infection with the organism called Toxoplasma gondii (T. gondii). This is a microscopic single-cell organism related to coccidia. All warm-blooded animals, including people, can be infected with this organism. It is an extremely well-adapted parasite and rarely causes significant disease to the individuals it infects.

How common is Toxoplasma in cats?

Toxoplasma occurs worldwide, and infection in cats is widespread. Many more cats are infected than show symptoms. In research studies, as many as one-half of adult cats in some geographical regions have antibodies to the organism in their blood, indicating that they have been exposed to the infection at some point in their life. Infection rates are higher in free-roaming and stray cats.

"Infection rates are higher in free-roaming and stray cats."

In contrast, infection is uncommon in pet cats that do little or no hunting and primarily or exclusively eat commercial cat foods. Despite the high number of cats infected with T. gondii, very few show significant clinical signs.

How is Toxoplasma transmitted? 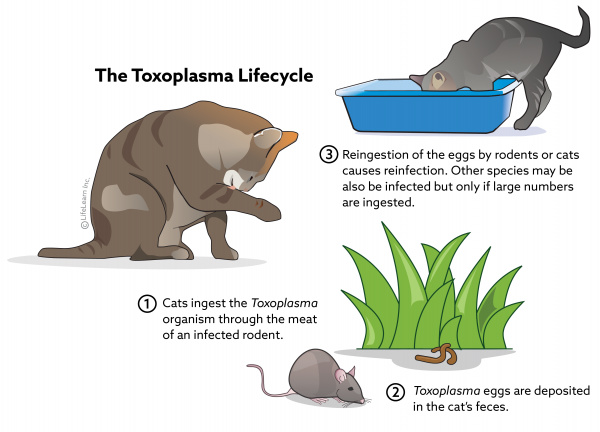 Cats are usually infected by ingesting the organism present in the meat of another infected animal, known as an 'intermediate host'. The intermediate host is usually a rodent. After infection, the Toxoplasma organism reproduces in the cat's intestinal tract. The replication in the intestinal tract results in the shedding oocysts (a form of eggs) in the feces. Cats are the only definitive hosts for T. gondii, which means that the organism can only produce oocysts when infecting a cat.

Oocysts represent a hardy form of the organism that can survive in the external environment for many months or even years. Other animals can become infected by ingesting these oocysts, but the disease will result only if large numbers are ingested.

In some cats, particularly if their immune defenses are compromised, Toxoplasma can invade beyond the intestine and spread into other internal organs of the cat’s body. In the internal organs, they may cause enough damage to cause signs of disease or may become dormant in a tissue cyst.

How do people get toxoplasmosis?

While cats are usually infected by eating infected rodents, or more rarely by ingestion of oocysts from the environment, humans are most commonly infected by eating contaminated food. Sheep, cattle, and pigs grazing on contaminated pastures, or fed oocyst-contaminated food, can develop the encysted form of the organism in their body tissues. If infected meat (typically beef, pork, or lamb) is not adequately cooked, or if proper hygiene precautions are not followed while handling uncooked meat, humans can become infected. Ingestion of oocysts from infected cats, such as gardening in contaminated soil, is a much less common source of human infection.

"...if proper hygiene precautions are not followed while handling uncooked meat, humans can become infected."

What disease does Toxoplasma cause in cats?

Although toxoplasmosis is a relatively common infection, it usually causes no disease in infected cats. However, if the cat is immunocompromised and its immune system is not working properly, Toxoplasma may continue to replicate, spread, and cause damage to tissues. When this happens, various clinical problems can develop, including eye disease, respiratory disease, diarrhea, liver disease, and neurological signs, depending on which tissues are affected.

Such disease may be acute (rapid onset) or more chronic, with periods of illness interspersed with periods of some recovery. It is important to remember that Toxoplasma gondii is an infrequent cause of disease in cats. Please consult your veterinarian if you are concerned about any clinical signs your cat is exhibiting.

How can toxoplasmosis be diagnosed and treated?

Toxoplasmosis is difficult to diagnose in cats because the signs can vary. Blood tests will determine whether a cat has been exposed to the organism. These tests do not necessarily mean that Toxoplasma is the cause of any disease since most exposed cats do not develop disease; however, high levels of certain antibodies can suggest current infection.  When toxoplasmosis is suspected in a cat, it is usually treated with a course of antibiotics.

How concerning is Toxoplasma in people?

As with infection in cats, most people infected with this organism do not develop a clinical disease at all or possibly just show mild and transient flu-like signs. However, there are some cases in which significant disease occurs, and one situation is particularly important. If a pregnant woman acquires Toxoplasma infection during pregnancy, the infection may be transmitted to the fetus and sometimes cause severe damage. This is only a risk if the woman acquires the infection during pregnancy. A woman previously exposed to the organism carries no risk of transmission to her fetus if she subsequently becomes pregnant.

"If a pregnant woman acquires Toxoplasma infection during pregnancy, the infection may be transmitted to the fetus and sometimes cause severe damage."

Although cats are essential to complete the life cycle of T. gondii, numerous surveys have shown that people who own cats have no higher risk of infection than those who don't own cats. There are several reasons for this:

How can humans avoid infection?

© Copyright 2022 LifeLearn Inc. Used and/or modified with permission under license.

Our goal is to provide a caring & flexible environment for our pets & owners!

We offer a variety of treatment options for your pet. And, we won’t pressure you into scripted protocols. We believe a trip to the vet should be a pleasant adventure for you and your pet.